Joanna Barck and Marcus Dolega have been living on their yacht, parked at Bolgatty island, in Kochi for a year. Now, despite the pandemic, they are preparing for their next big adventure: sailing home to Germany with their dog Nico

The challenge of the pandemic is just one thing that Marcel Dolega, his wife Joanna Barck and their pet dog Nico will have to cope with as they return to Europe on their yacht Chulugi (a South American word that means ‘dancing with the seagulls’).

“There is the additional challenge of passing through the civil war in Yemen on the starboard and the pirates of Somalia on the port side,” he says explaining that “we have to follow the International Recommended Transit Corridor for big ships”.

Marcel and Joanna arrived in Kochi in October 2019 and the sudden lockdown in the wake of COVID-19 put paid to their plans to head to Thailand.

For the past year, the two copywriters have been living in their yacht parked at the Kochi International Marina on Bolgatty Island. Given that many ports are still closed, Marcel feels they will not be allowed to go ashore at Suakin, Sudan, where he plans to stop for provisions. Their route will take them across the Indian Ocean and the Red Sea and they will enter the Mediterranean Sea through the Suez Canal.

Both Marcel and Joanna have swung into work mode getting the yacht ready for the return journey. As the 40 footer cutter-rig steel yacht has been idle for a year, Marcel organised for a diver to clean the hull under the water line. The couple watches the winds keenly waiting for the right direction for them to set sail. They are also monitoring weather forecasts carefully.

“It’s normal in a sailor’s life. We have to get an idea of how the weather can develop in the future. The start of our journey depends on that,” says Joanna.

Their departure checklist includes two months worth of supplies: diesel, water, gas and groceries. Other important errands include collecting a health certificate for Nico and readying all their travel documents.

Both say that they will miss the friends they have made, especially P Sajeevan, guard at the Bolgatty Palace Hotel, who is also a poet and has written an evocative poem on the couple. “To say goodbye to him was very touching,” says Joanna. “We have lived here for a year and I want to keep good memories of my stay here, which turned out to be very different. We wanted to do something for the community and to help the neighbourhood. This time, by chance, it has been through dogs.”

The street dogs of Bolgatty Island

Joanna is referring to the stray dogs of Bolgatty Island that she looked after during the lockdown. She laughs that Nico will also miss the dogs but “he may be distracted by the dolphins playing around the bow of Chulugi”.

Marcel and Joanna hope to return to India and reunite with the friends they have made here over the past year.

“It will be a homecoming of sorts when we return to Kochi in a couple of years,” says Joanna, adding that the German equivalent of ‘bon voyage’ is “break the mast and the ropes”, meaning ‘get on with the journey’.

“When the lockdown was announced, a hush fell over the island. There was an eerie quietness. We did not know what to do,” says Joanna. They were worried about being targeted or shunned by the local people due to rumours of foreigners being carriers of the Coronavirus. Instead, to their surprise, the villagers responded with warmth, inviting them to their homes.

With provisions on the boat running out, Joanna and Marcel approached the manager of the Bolgatty Palace Hotel who organised food for them.

Slowly with food aggregators delivering meals, things eased up. This was when their love affair with the street dogs on the island began.

“As the hotel kitchen had stopped functioning, the dogs were not getting any leftovers. The weddings were halted and there were no events. The car drivers for these events were the biggest source of food for the dogs who began to go hungry and grow thinner,” says Joanna, who began cooking a big pot of rice adding Nico’s dog food for taste and flavour.

She began to feed the dogs daily. Soon a routine and a bond between the couple and the dogs was established.

She recounts her experiences with Mamma, who gave birth to three puppies, for whom the couple has found homes; One Eye, a “husky-like dog”; and Little Heart, so named because of a white heart-shaped patch on her head.

“They are very alert and make good guard dogs,” says Joanna, adding that she hopes they will find good homes for the dogs before they set sail. 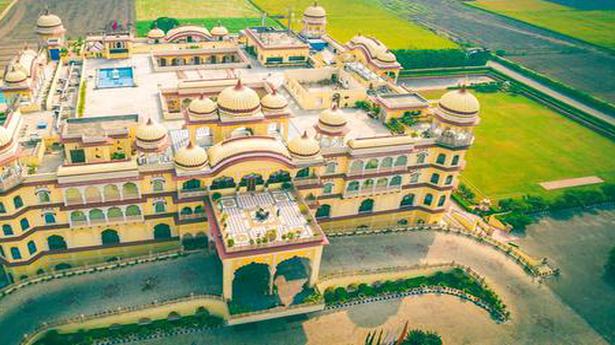