A Palestinian demonstrator uses a sling to hurl stones at Israeli forces during a protest over a cross-border violence between Palestinian militants in Gaza and the Israeli military, in Hebron in the Israeli-occupied West Bank

GAZA CITY, Palestinian Territories: Heavy air strikes and rocket fire in the Israel-Gaza conflict claimed more lives on both sides Tuesday as calls intensified for an end to the bloodshed.
A UN Security Council meeting broke up without issuing a statement, but France then said it had proposed a resolution calling for a ceasefire, in coordination with Israel’s neighbours Egypt and Jordan.
Zhang Jun, Beijing’s ambassador to the UN, told reporters his team had heard the French ceasefire proposal and China was “supportive”.
Sporadic bombardment of Gaza city continued after midnight, with residents kept awake as Israeli jets flew low overhead, an AFP correspondent in the besieged coastal strip said.
Randa Abu Sultan, 45, said her family no longer knew what sleep was.
“We’re all terrified by the sound of explosions, missiles and fighter jets,” said the mother of seven.
“We all sit together in a single room. My four-year-old son tells me he’s scared that if he falls asleep he’ll wake up to find us dead.”
Earlier in the evening, an AFP photographer saw streaks of light in the sky as Israel’s air defence system intercepted rockets launched from Gaza.
Israeli forces and protesters meanwhile clashed at multiple flashpoints across the occupied West Bank and in east Jerusalem, hospitalising scores, as Palestinians rallied in solidarity with their besieged Gazan counterparts.
Dozens were treated for wounds caused by live bullets, medics said.
Israeli air strikes have killed 217 Palestinians, including 63 children, and wounded more than 1,400 people in just over a week in the Hamas-run enclave, according to Gaza’s health ministry.
The death toll on the Israeli side has risen to 12 after rockets Hamas fired at the southern Eshkol region killed two Thai nationals working in a factory, police said.
Hamas has launched nearly 3,700 rockets at Israel since May 10, often forcing people living by Gaza into bomb shelters around the clock.
Israel’s near-relentless bombing campaign in response has sent fireballs, debris and black smoke into the sky, leaving two million Palestinians in Gaza desperate for reprieve.
The humanitarian crisis has deepened in the impoverished strip, with the UN saying 72,000 Palestinians have been displaced.
But a convoy of international aid trucks that started rolling into Gaza through a border crossing from Israel, Kerem Shalom, was halted when Israel quickly shuttered it again, citing a mortar attack on the area.
Tuesday’s UN Security Council session, the fourth since the conflict escalated, was called after the United States, a key Israel ally, had once again blocked adoption of a joint statement calling for a halt to the violence the previous day.
“We do not judge that a public pronouncement right now will help de-escalate,” US envoy Linda Thomas-Greenfield said during Tuesday’s closed-door meeting, according to a diplomat.
France and Egypt have been pushing for a ceasefire deal, and EU foreign policy chief Josep Borrell on Tuesday backed the manifold calls for one.
He also urged Israel’s military to act in a “proportionate” manner.
Israel says fighter jets have hit Hamas’s underground tunnels, which it has previously acknowledged run in part through civilian areas.
A strike Monday knocked out Gaza’s only Covid-19 testing laboratory, the health ministry said, and the Qatari Red Crescent said a strike damaged one of its offices.
Hospitals in the territory, which has been under Israeli blockade for almost 15 years, have been overwhelmed by patients and there are frequent blackouts.
Speaking at an air force base in Israel’s south, Netanyahu said Hamas and Islamic Jihad, the second biggest armed group in Gaza, had “received blows they didn’t expect”.
“We’ll continue as long as necessary to bring… quiet back to the citizens of Israel,” he added.
Palestinians across the West Bank and in Israeli-annexed east Jerusalem mobilised Tuesday for protests and a general strike that shuttered non-essential businesses, in support of those under bombardment in Gaza.
Palestinian president Mahmud Abbas’ Fatah movement had called for a “day of anger”, a call echoed in Arab and ethnically mixed towns inside Israel.
“We are here to raise our voice and stand with the people in Gaza who are being bombed,” Ramallah protester Aya Dabour told AFP.
Israel’s army said troops came under fire north of Ramallah. It said two soldiers suffered leg injuries and were taken to hospital.
The Palestinian health ministry said four Palestinians were shot dead in the West Bank, bringing to 24 the total number of Palestinians killed there since May 10.
The Israeli army said one had attempted to attack soldiers in Hebron.
The Palestinian Red Crescent said its teams had treated more than 150 people in Jerusalem and the occupied West Bank, including 35 with live bullet wounds and more than 80 suffering from tear gas inhalation.
Tensions again flared in east Jerusalem’s flashpoint Sheikh Jarrah neighbourhood, where Palestinian protesters faced off against police, who used stun grenades and “skunk water” cannon to disperse protesters.
The Israel-Gaza conflict was sparked after clashes broke out at east Jerusalem’s flashpoint Al-Aqsa mosque compound — one of Islam‘s holiest sites.
This followed a crackdown against protests over planned expulsions of Palestinians in Sheikh Jarrah. 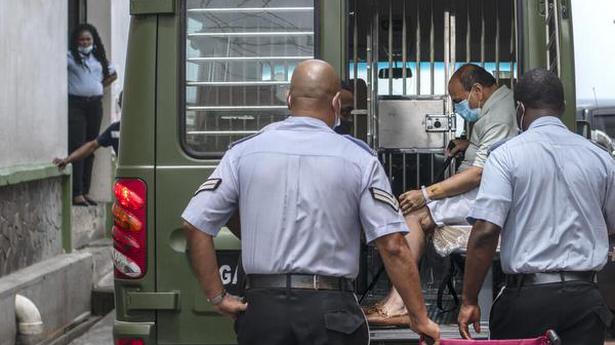