Each comorbidity increases vulnerability, but in case of vaccine shortage, multimorbidity should be given first preference

The operational guidelines for COVID-19 vaccination issued recently by the union health ministry has once again identified the four high-risk groups — healthcare workers, frontline workers, persons over 50 years of age, and persons younger than 50 years with comorbidities — that would receive COVID vaccine on priority.

Unlike in other groups, national databases of people with comorbidities are not available. However, though not comprehensive, since 2010, State governments have been conducting population-based district level screening to detect non-communicable diseases under the National Program for the Prevention and Control of Cancer, Diabetes, Cardiovascular Diseases and Stroke (NPCDCS) guidelines.

Also, as part of the Ayushman Bharat initiative, States have been carrying out universal screening of people aged over 30 years. State governments have been asked to refer to the screening data for non-communicable diseases to identify individuals with comorbidities for COVID vaccination.

According to Dr. Giridhara Babu, Epidemiologist at the Public Health Foundation of India, Bengaluru, two studies have found varying degrees of comorbidities in COVID-19 patients.

Considering a range of comorbidities that increases the risk of disease severity, people with which comorbidity should be given more priority for vaccination? “The evidence available is insufficient to indicate the degree of severity amongst the comorbidities.

The priority of vaccination [based on comorbidities] depends on various factors,” says Dr. Babu in an email. “As per the evidence elsewhere, diabetes, hypertension, coronary artery disease and chronic kidney disease increase the risk of COVID-19.”

Virologist Dr. Shahid Jameel, Director of the Trivedi School of Biosciences at Ashoka University says in an email: “My pick would be hypertension, diabetes and COPD. Even though COPD comes lower in the risk score, it also compromises lung function as in severe COVID, and that would be a double whammy.”

But considering that Indians often have many risk factors, should people with two or more comorbidities be prioritised over those with just one comorbidity?

“Each comorbidity increases vulnerability. However, in case of shortage of vaccines, multimorbidity should be given first preference,” Dr. Babu says.

Dr. Jameel too agrees that people with multiple comorbidities are at greater risk and hence should be prioritised over those with a single comorbidity. “My guess is that having more than one comorbidity would be more than the sum of parts in terms of risk,” says Dr. Jameel.

Dr. Samiran Panda of ICMR says that people below 50 years who have been newly diagnosed with comorbidities should not be counted as high-risk for vaccination on priority. Even the union government’s guidance to States is to use the existing database of comorbidities to vaccinate people. Since the database is not comprehensive, relying solely on that can be problematic.

Duration of chronic disease would certainly have an impact on physiology, and therefore those with longer duration of the conditions would be more at risk, says Dr. Jameel.

Also, poor people and those living in rural areas very often are unaware of their disease status. Any policy that excludes people with newly diagnosed disease will inevitably affect the poor.

“I suspect that only a few people qualify for consideration based on documentation of their comorbidities. This will unduly favour the rich and educated who keep documentation and thereby further exacerbate health inequity,” stresses Dr. Babu. “Comprehensive efforts should be done to test the blood glucose levels and blood pressure to make a new diagnosis and vaccinate them.”

Besides the poor and people in rural areas, Dr. Jameel rightly points out that millions of middle-class Indians are unaware of their underlying chronic conditions. “This poses a challenge, but would hopefully also catalyse fresh efforts to develop the right health databases,” he says.

In addition to using the NCD database, States should allow people with comorbidities to self-report and also conduct a quick survey to screen, enrol and schedule the vulnerable for vaccination in the entire country, says Dr. Babu.

Another ethical challenge revolves around gender. Males have been found to be at a greater risk of progressing to severe disease and even dying compared with females. Should males with comorbidities then be prioritised over females with comorbidities? Will that further exacerbate the underlying gender-based inequities?

“Risk of severe disease and death is higher in males than in females, particularly in older age groups. However, prioritising males with comorbidities over females will result in inducing and worsening inequities,” says Dr. Babu. 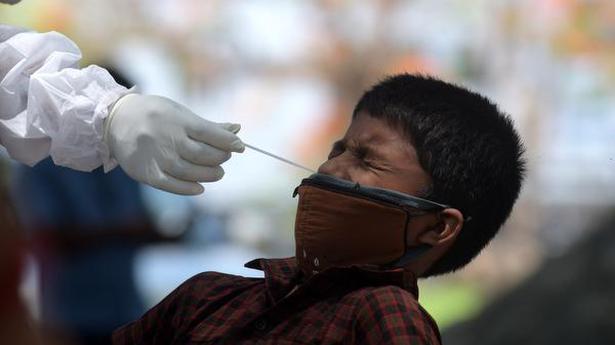