CHANDIGARH: Backing the agitating farmers who are demanding the withdrawal of the farm laws, Punjab chief minister Amarinder Singh on Wednesday said the solution has to be found at the level of the Prime Minister, adding that maintaining the law and order in the state is his government’s paramount duty and he will not allow any mess in the state.
“The solution has to be found at the level of Prime Minister (Narendra Modi). He (PM Modi) must sit with his ministers and home minister and come to a solution. It has to be found by the Prime Minister finally,” Amarinder Singh said while speaking to ANI about the ongoing farmers protest.
“Maintaining the law and order in the state is my duty and I will not allow any mess. I have seen Operation Blue Star, time of terrorism, the assassination of the chief minister. Pakistan is daily sending drones – where to? They are either spotted in Punjab or Kashmir,” he added on the law and order situation arising due to protests.
“It is the duty of the government to respond to the people of the country. I feel that farmers have made their stand very clear that the laws should be repealed,” said Punjab CM.
Stating that “no law has that sanctity which can’t be touched,” Amarinder Singh said, “the Constitution has been amended over 100 times since it was introduced in 1950. So why is it that this law can’t be amended and you just have to withdraw it?”.
Extending his full support to the ongoing farmers’ protest at the Delhi border, Singh said, “Farmers have every right to protest. My sympathy is 101 per cent with the farmers, there are old men and women sitting and protesting at the borders (Delhi border). Till last reports, 55 farmers had died – they are sacrificing their lives.”
Over farm union’s demand to withdraw the agriculture laws, he said, “If farmers are saying to withdraw the laws, you can withdraw laws and can talk to farmer’s committees to bring whatever laws you want later on. But to bring peace to the state, bring farmers home, repeal the laws as they are demanding it.”
So far, several rounds of talks have been held between the central government and the unions. Meanwhile, despite rains and the ongoing cold wave across North India, farmers agitating against the Centre’s farm laws stood strong at the borders of the national capital and continued their protest.
The farmers protest at the borders of Delhi entered its 42nd day on Wednesday against the newly enacted farm laws – Farmers’ Produce Trade and Commerce (Promotion and Facilitation) Act, 2020, the Farmers (Empowerment and Protection) Agreement on Price Assurance, and Farm Services Act, 2020, and the Essential Commodities (Amendment) Act, 2020. 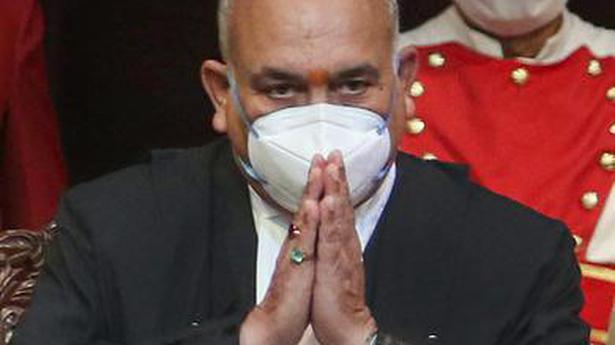