India locking horns with Pakistan irrespective of the venue has always been celebrated as a promising cricketing event across the globe. The emotions involved, besides the history between the two countries, make players from either side offer more than 100-percent.

One such tale of the epic rivalry happened exactly on this day twenty-three years ago. In this episode of cricketing folklore, Mohammed Azharuddin-led India secured a thrilling win against arch-rivals Pakistan in the third final of the Silver Jubilee Independence Cup in 1998 in Dhaka. Riding on Sourav Ganguly’s brilliant century and a crucial partnership between him and Robin Singh for the third wicket, India then chased down a stiff 315 with a ball to spare.

The match, which was reduced to 48 overs a side, saw destructive Pakistan opener Saeed Anwar scored a brilliant 140 off 132 deliveries, thus putting his side in a formidable position. Anwar along with teammate Ijaz Ahmed added 230 runs for the third wicket, with the latter finishing the innings at 117 from 112 deliveries.

In response to Pakistan’s mammoth 314/5, openers Sachin Tendulkar and Ganguly provided India with a solid start as the pair added 71 runs for the first wicket inside nine overs. What followed next was a two-man show shared between Ganguly and Robin. Making use of the already laid platform by Sachin, both the cricketers took things into their hands as a ferocious Pakistan bowling line-up struggled for a breakthrough.

The pair added 179 runs for the second wicket before Robin was dismissed by Mohammad Hussain on 82 from 83 balls. Ganguly, however, kept going and remained at the crease till the 43rd over.

What made the event more interesting was India suffering a middle-order collapse, with no batsman being able to reach double digits. Dodging the nervy moments, the Indian tail comprising Hrishikesh Kanitkar and Javagal Srinath saw India through and helped their side register a three-wicket win.

With this victory, India won the three-match finale 2-1. 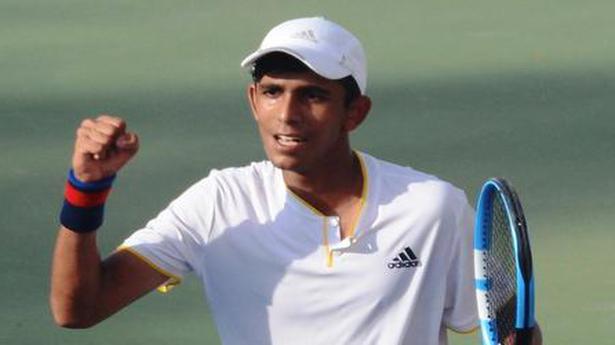